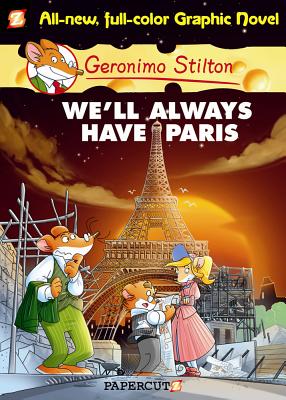 This is book number 11 in the Geronimo Stilton Graphic Novels series.

What's Geronimo to do in order to prevent the Pirate Cats from turning the almost-complete Eiffel Tower into a gigantic monument to Catardone's already monumental ego? No matter what the answer, this is a mission that will require the scientific expertise of Ampy Von Volt, as Geronimo takes to the skies in this new high-flying adventure set in late 19th century Paris.

“GERONIMO STILTON is a hoot for those who love animals and adventure. The pace moves smoothly, the text is robust but not overwhelming, and the art is kid friendly and fun. What's not to like?” —THE GRAPHIC CLASSROOM

“Is it fact? Is it fiction? Neither. It's faction, and it's fun!” —SHELF-EMPLOYED

“Geronimo fans will eat this up quicker than a wheel of cheddar.” —WASHINGTON TIMES