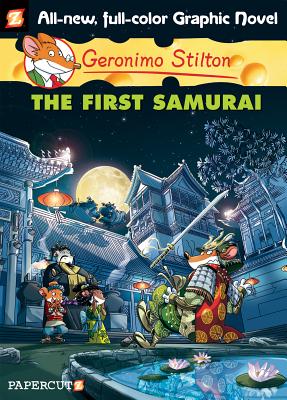 This is book number 12 in the Geronimo Stilton Graphic Novels series.

It's a samurai showdown as Team Geronimo follows the Pirate Cats to feudal Japan!

It's feudal Japan of the first Tokugawa dynasty, and the Pirate Cats are trying to be assigned a specific fiefdom by the emperor. Why? You'll have to read this tale to find out – it will be a legendary romp, with Geronimo Stilton unwittingly becoming a legendary swordsman, Trap showing off his legendary appetite, and Thea Stilton accidentally inventing Kabuki theater! A rattastic tale of honor, acrobatics, and... cars?

“GERONIMO STILTON is a hoot for those who love animals and adventure. The pace moves smoothly, the text is robust but not overwhelming, and the art is kid friendly and fun. What's not to like?” —THE GRAPHIC CLASSROOM

“Is it fact? Is it fiction? Neither. It's faction, and it's fun!” —SHELF-EMPLOYED

“Geronimo fans will eat this up quicker than a wheel of cheddar.” —WASHINGTON TIMES