Voices of a People's History of the United States, 10th Anniversary Edition (Paperback) 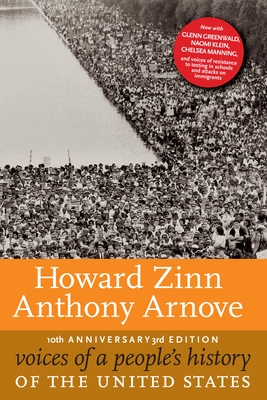 By Howard Zinn, Anthony Arnove
$24.95
Email or call for price.

Selected testimonies to living history—speeches, letters, poems, songs—offered by the people who make history happen, but are often left out of history books: women, workers, nonwhites. Featuring introductions to the original texts by Howard Zinn.

New voices featured in this 10th Anniversary Edition include Chelsea Manning, speaking after her 35-year prison sentence); Naomi Klein, speaking from the Occupy Wall Street encampment in Liberty Square; a member of Dream Defenders, a youth organization that confronts systemic racial inequality; members of the Undocumented Youth movement, who occupied, marched, and demonstrated in support of the DREAM Act; a member of the Day Laborers movement; Chicago Teachers Union strikers; and several critics of the Obama administration, including Glenn Greenwald, on governmental secrecy.

The visionary historical work of professor, historian, and activist HOWARD ZINN (1922-2010) is widely considered one of the most important and influential of our era. In his books, including the legendary best-selling A People's History of the United States and numerous other titles, Zinn affirms the power of the people to influence the course of events.

ANTHONY ARNOVE is the author of Iraq: The Logic of Withdrawal, editor of Iraq Under Siege and The Essential Chomsky, and coauthor, with Howard Zinn, of Voices of A People's History of the United States and Terrorism and War.

"In Voices, Howard Zinn has given us our true story, the ongoing, not-so-secret narrative of race and class in America." —Russell Banks

"In these days of misinformation and spin, this book is a refreshing change of pace as we are able to read firsthand what people actually said, not what somebody else wants you to think they said." —BlogCritics

"Voices should be on every bookshelf. [It presents] the rich tradition of struggle in the United States, from the resistance to the conquest of the Americas in the era of Columbus through the protests today of soldiers and their families against the brutal invasion and occupation of Iraq." —Arundhati Roy