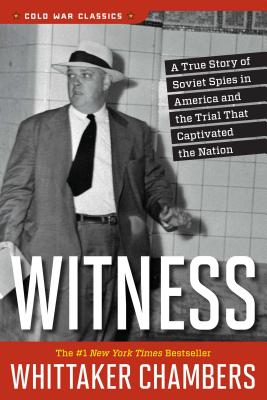 "As long as humanity speaks of virtue and dreams of freedom, the life and writings of Whittaker Chambers will ennoble and inspire." - PRESIDENT RONALD REAGAN

"One of the dozen or so indispensable books of the century..." - GEORGE F. WILL

"Witness changed my worldview, my philosophical perceptions, and, without exaggeration, my life." - ROBERT D. NOVAK, from his Foreward

"Chambers has written one of the really significant American autobiographies. When some future Plutarch writes his American Live, he will find in Chambers penetrating and terrible insights into America in the early twentieth century."  - ARTHUR SCHLESINGER JR.

"Chambers had a gift for language....to call Chambers an activist or Witness a political event is to say Dostoevsky was a criminologist or Crime and Punishment a morality tract." - WASHINGTON POST

"Chambers was not just the witness against Alger Hiss, but was also one of th articulators of the modern conservative philosophy, a philosophy that has something to do with restoring the spiritual values of politics." - SAM TANENHAUS, author of Whittaker Chambers

"One of the few indispensable autobiographies ever written by an American - and one of the best written, too." - HILTON KRAMER, The New Criterion

First published in 1952, Witness is the true story of Soviet spies in America and the trial that captivated a nation. Part literary effort, part philosophical treatise, this intriguing autobiography recounts the famous Alger Hiss case and reveals much more. Chambers' worldview and his belief that "man without mysticism is a monster" went on to help make political conservatism a national force.

Jay Vivian Chambers (1901 –1961), known as Whittaker Chambers, was an American editor who denounced his Communist spying and became respected by the American Conservative movement during the 1950s.

After early years as a Communist Party member and Soviet spy, he defected from communism (underground and open party) and worked at Time magazine. Under subpoena in 1948, he testified in what became Alger Hiss's espionage trials  and he became an outspoken anti-communist (all described in Witness). Afterwards, he worked briefly as a senior editor at National Review . President Ronald Reagan awarded him the Medal of Freedom posthumously in 198