Geronimo Stilton Graphic Novels #15: All for Stilton, Stilton for All! (Hardcover) 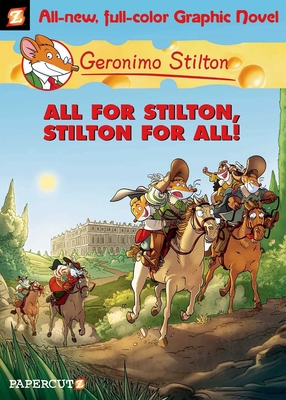 This is book number 15 in the Geronimo Stilton Graphic Novels series.

Geronimo, Trap, Pandora, Benjamin and Patti return to the era of Louis XIII on the trail of the Pirate Cats. At Fontainebleu Castle they enroll in Richelieu's army of mousketeers and are commanded by the cardinal to oppose two brigands in the area. The mice discover that the brigands are no other than Cattardone and Tersilla who have replaced Louis XIII with Bonzo! Our heroes must find the real Louis XIII and and put him back on the throne.

Born in New Mouse City, Mouse Island, GERONIMO STILTON is Rattus Emeritus of Mousomorphic Literature and of Neo-Ratonic Comparative Philosophy. He is the director of The Rodent's Gazette, New Mouse City's most widely read daily newspaper. Stilton was awarded the Ratitzer Prize for his scoops on The Curse of the Cheese Pyramid and The Search for Sunken Treasure. One of his bestsellers won the 2002 eBook Award for world's best-selling electronic book. In 2006 he won a Nickelodeon Kids Choice Award and in 2008 he won the Cartoomics prize "Beyond Comics." His works have been published all over the globe. In his spare time, Mr. Stilton collects antique cheese rinds.