The Road Not Taken: Edward Lansdale and the American Tragedy in Vietnam (Paperback) 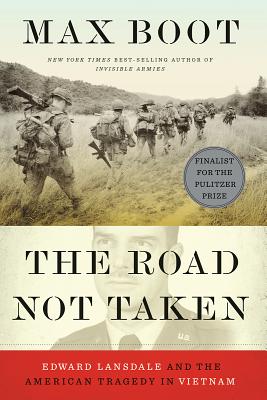 Finalist for the Pulitzer Prize (Biography)

Praised as a “superb scholarly achievement” (Foreign Policy), The Road Not Taken confirms Max Boot’s role as a “master chronicler” (Washington Times) of American military affairs. Through dozens of interviews and never-before-seen documents, Boot rescues Edward Lansdale (1908–1987) from historical ignominy to “restore a sense of proportion” to this “political Svengali, or ‘Lawrence of Asia’ ”(The New Yorker). Boot demonstrates how Lansdale, the man said to be the fictional model for Graham Greene’s The Quiet American, pioneered a “hearts and minds” diplomacy, first in the Philippines and then in Vietnam. Bringing a tragic complexity to Lansdale and a nuanced analysis to his visionary foreign policy, Boot suggests Vietnam could have been different had we only listened.

With contemporary reverberations in Iraq, Afghanistan, and Syria, The Road Not Taken is a “judicious and absorbing” (New York Times Book Review) biography of lasting historical consequence.

Max Boot is a Senior Fellow at the Council on Foreign Relations, a columnist for the Washington Post, and a global affairs analyst for CNN. His most recent book is the New York Times bestseller The Road Not Taken: Edward Lansdale and the American Tragedy in Vietnam.

The Road Not Taken is an impressive work, an epic and elegant biography based on voluminous archival sources. It belongs to a genre of books that takes a seemingly obscure hero and uses his story as a vehicle to capture a whole era... The Road Not Taken gives a vivid portrait of a remarkable man and intelligently challenges the lazy assumption that failed wars are destined to fail or that failure, if it comes, cannot be saved from the worst possible outcome.

Judicious and absorbing.... Boot, a senior fellow at the Council on Foreign Relations, brings solid credentials to this enterprise. . . . Here he draws on a range of material, official and personal.... What emerges is a picture of a man who from an early point possessed an unusual ability to relate to other people, a stereotypically American can-do optimism, an impatience with bureaucracy and a fascination with psychological warfare.
— Fredrik Logevall, New York Times Book Review

Max Boot capably and readably tracks the fascinating but ultimately depressing trajectory of this shadowy figure, who, as a murky undercover operative and a literary and cinematic avatar, looms over or lurks behind some of the crucial moments in U.S. foreign policy in the decades following World War II, culminating in its greatest disaster.
— James G. Hershberg, Washington Post

Max Boot has now put Lansdale back where he belongs, at the center of the story of the war.... [H]is book is the product of serious scholarship, not ideology. Boot has scoured the archives and found intriguing new material.... The Road Not Taken is an admiring but also critical biography; it invites many quibbles but rewards the reader with an engrossing portrait of a unique figure who defied the bureaucratic values of the institutions in which he served.

A brilliant, extremely well-written book about a forgotten figure who was one of the most extraordinary and utterly unorthodox espionage agents in history.
— Steve Forbes, Forbes

The Road Not Taken... is expansive and detailed, it is well written, and it sheds light on a good deal about U.S. covert activities in postwar Southeast Asia.... [Boot] believes that Lansdale’s approach was the wiser one, but he is cautious in his analysis of what went wrong.

Edward Lansdale is probably the greatest cold warrior that most Americans have never heard of. Max Boot has written a fascinating account of how this California college humorist, frat boy and advertising executive evolved into a counterinsurgency expert before the term was even coined. . . . This book should be read in Baghdad and Kabul, not only by Americans, but by local leaders.
— Gary Anderson, Washington Times

Deeply researched and evenhanded, The Road Not Taken: Edward Lansdale and the American Tragedy in Vietnam is a superb scholarly achievement.... [Boot] comes at Lansdale having already written two major books of small wars and counterinsurgency, a solid foundation that he takes to a new level here with rigorous research and dogged investigation into little-known corners of Lansdale’s life.

In this fine portrait of Edward Lansdale, Max Boot adds to his well-deserved reputation as being among the most insightful and productive of contemporary historians. This is a superb book.
— Lewis Sorley, National Review

A brilliant biography of the life—and a riveting description of the times—of Edward Lansdale, one of the most significant figures in post-World War II Philippines and then in Vietnam.... The Road Not Taken not only tells Edward Lansdale’s story with novelistic verve but also situates it wonderfully in the context of his tumultuous experiences—and offers important lessons for the present day.