These Honored Dead: Reflections on the 20th Anniversary of 9/11 (Hardcover) 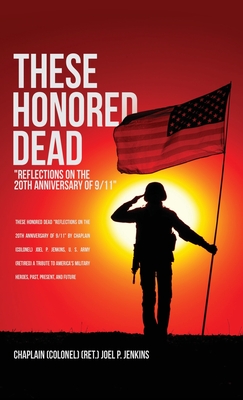 This book describes the experiences of an Army chaplain who officiated at the first two Memorial Services conducted in the Pentagon after 9/11, and his support to the survivors. On this 20th anniversary year of 9/11, this book seeks to honor and remember those who died on that day, while also honoring and remembering the fallen heroes from all of America's wars. This book is a call for America: to never forget the over a million fellow Americans who died for their country; and to encourage today's overworked "all volunteer" military. Stories are included from Chaplain Jenkins service in Iraq, on the staff of General Martin Dempsey, and from his tenure as the Rear Detachment chaplain for the 82nd Airborne Division. With the 82nd, Chaplain Jenkins officiated at over one hundred services for fallen paratroopers. The book traces the struggles, and eventual breakthroughs, of native Americans, Afro Americans, Japanese and Chinese minorities in relationship to military service. Against major barriers, heroic service and sacrifice are seen from these groups. Various vignettes of military heroes, from the 19th century until the present, are described, as a reminder for America to be grateful for the sacrifices of her military. BIO Chaplain (Colonel) (Ret.) Joel Jenkins and his wife, Donna, reside in Charlottesville, VA. Joel retired from Fort Bragg, NC in 2011, with 27 years of service. His service included active duty, along with National Guard and Army Reserves service. He also pastored churches in NC and Virginia. Highlights of his military career include officiating at the first Memorial Services in the Pentagon following 9/11. He served a year in Iraq on the staff of General Martin Dempsey as the Command Chaplain for MNSTC-I. His final position was the Rear Detachment chaplain for the 82nd Airborne Division.