The Doctrine of Fascism (Paperback) 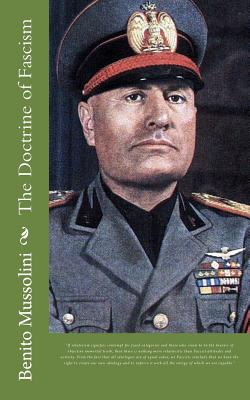 "The Doctrine of Fascism" ("La dottrina del fascismo") is an essay written by Giovanni Gentile, but credit is given to Benito Mussolini. It was first published in the Enciclopedia Italiana of 1932, as the first section of a lengthy entry on "Fascismo" (Fascism). The entire entry on Fascism spans pages 847-884 of the Enciclopedia Italiana, and includes numerous photographs and graphic images. The Mussolini essay leads off the entry: FASCISMO - Movimento politico italiano creato da Benito Mussolini (v.). DOTTRINA Idee Fondamentali. (the first section of the essay) A second section of the essay is titled: "Dottrina Politica e sociale." The Mussolini entry starts on page 847 and ends on 851 with the credit line "Benito Mussolini." All subsequent translations of "The Doctrine of Fascism" are from this work. A key concept of the Mussolini essay was that fascism was a rejection of previous models: "Granted that the 19th century was the century of socialism, liberalism, democracy, this does not mean that the 20th century must also be the century of socialism, liberalism, democracy. Political doctrines pass; nations remain. We are free to believe that this is the century of authority, a century tending to the 'right', a Fascist century. If the 19th century was the century of the individual (liberalism implies individualism) we are free to believe that this is the 'collective' century, and therefore the century of the State.