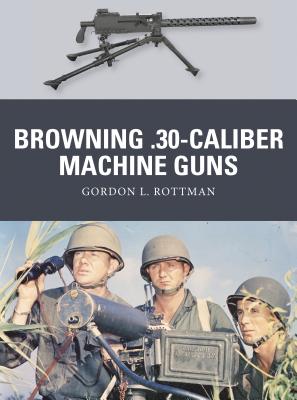 This is book number 32 in the Weapon series.

Browning .30-caliber machine guns saw US Army, Navy, Marine, and Air Force service in World War I & II, Korea, and Vietnam, and are still occasionally found in use elsewhere even today. Produced in both water-cooled and air-cooled versions, it has been employed in every imaginable role for a machine gun - antipersonnel, antiaircraft, mounted on aircraft as both defensive and offensive armament, defensive armament aboard vehicles (armored and soft-skin), mounted on watercraft, and others.

The .30-caliber story began in World War I, as legendary US weapon-designer John M. Browning strove to develop a belt-fed, water-cooled heavy machine gun to provide infantry support. Significantly lighter than the British Vickers and the German MG 08, the hard-wearing Browning M1917 was among the best in its class; as the M1917A1 it served through World War II and the Korean War, and was only retired in the late 1950s as evolving infantry tactics demanded lighter, more mobile support weapons.

Initially developed as a tank machine gun in World War I, the M1919 air-cooled version saw lengthy service with the US Army, Navy, Marine Corps and Air Force - as well as the armed forces of other nations - in an enormous variety of roles and environments. World War I had demonstrated that infantry-support machine guns had to be light enough to be hand-carried over rough terrain; the M1919's air-cooled operation made this possible. The commonest version, the M1919A4, was widely employed throughout World War II, Korea, and beyond, while M1919 variants were used as the secondary armament for all US tanks in World War II and on some types of US aircraft and watercraft well into the 1960s. The 'thirty' set such a high standard in reliability that it became the benchmark against which all subsequent weapons have been judged.

Employing gripping first-hand testimony and featuring specially commissioned illustrations and detailed photographs, many in color, this lively study of the Browning .30-caliber machine gun reveals the origins, combat history and legacy of this versatile and dependable weapon.

“...a superb book that is fascinating to read. A great addition to this new series and one that I am positive you will enjoy. Highly recommended.” —Scott Van Aken, www.modelingmadness.com