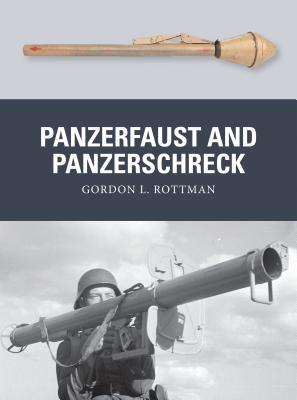 This is book number 36 in the Weapon series.

These lethal man-portable anti-tank weapons enabled Wehrmacht infantry to destroy T-34 and Sherman tanks. Written by an expert on anti-tank warfare, this book reveals the fascinating development history of the Panzerfaust and Panzerschreck and accessess the tactics that were employed by the soldiers using these two feared weapons.
Two of World War II's most distinctive weapons, the Panzerfaust and Panzerschreck offered German and other infantrymen the ability to destroy enemy tanks singlehandedly at close range. While the Panzerschreck owed its origins largely to the US bazooka, the Panzerfaust was a revolutionary design that was unlike any previous weapon, and went on to influence anti-tank technology and tactics for decades after World War II.
Germany had begun World War II with several inadequate antitank weapons for infantry use, supplemented by improvised and captured weapons and, from 1942, a hand-delivered 3kg antitank shaped charge. As the fortunes of war turned against Germany, what was desperately needed was an antitank weapon that allowed the individual soldier to destroy a tank. The first effort to field such a weapon began with the Faustpatrone 43, a handheld short tube with a propellant charge and an over-caliber, shaped-charge warhead; it was the first of the Panzerfaust ("armor fist") series of anti-tank weapons. The warhead was propelled by a launcher cartridge. The sights were extremely crude, but more sophisticated sights were unnecessary owing to the short ranges and the fact that tanks were large targets. Panzerfaust models were designated by two- or three-digit numbers indicating their approximate range in meters. The reloadable Panzerfaust 250 was under development a the war's end, as was an anti-personnel high-explosive-fragmentation projectile.
The Panzerfaust was not manned by a dedicated crew but was issued to individuals. Training was extremely simple and given in the form of a lecture and demonstrations, often without even any live fire. German propaganda made much of the Panzerfaust capable of being use by Hitler Youth teenagers, old men of the Volkssturm and other civilians. Over eight million Panzerfauste of all types were produced, and they became as widely used as hand grenades. They proved to be comparatively effective against tanks and other armored fighting vehicles, as well as fortifications and buildings. Allied troops, notably Soviet forces, made widespread use of captured Panzerfauste, and they were also supplied to German allies such as Finland, Hungary, and Bulgaria. The Germans provided the Japanese with examples and plans for the Panzerfaust and they went on to develop their own reloadable and very different version called the 45mm Type 5 recoilless anti-tank weapon; it was to be used to defend the Home Islands.