Barack Obama: Quotes to Live by: A Life-Affirming Collection of More Than 170 Quotes (Hardcover) 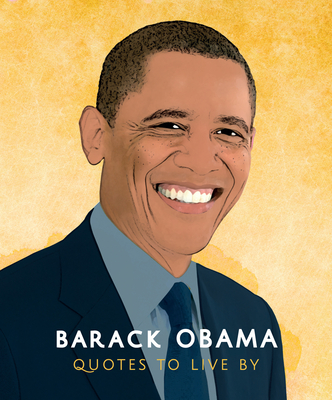 This is book number 2 in the Little Book Of... series.

A life-affirming collection of more than 170 quotes from one of the world's most admired and respected public figures: Barack Obama. "Where we are met with cynicism and doubts and those who tell us that we can't, we will respond with that timeless creed that sums up the spirit of a people: Yes We Can." --Barack Obama, victory speech, Chicago, 2008 From a law professorship, to a seat in the Illinois State Senate, to becoming the first African-American president of the United States, Barack Obama's trajectory to the most powerful political position in the world is legendary. Quotes to Live By offers a beautifully presented collection of inspirational and moving statements by one of the most important figures of our time, a man as renowned for his eloquence as for his groundbreaking achievements. The quotes include: "Change will not come if we wait for some other person or some other time. We are the ones we've been waiting for. We are the change that we seek." --Presidential nomination speech, February 2008 "We did not come to fear the future. We came here to shape it." --Joint session of Congress on health care, September 2009 "Politicians have always lied, but it used to be if you caught them lying they'd be like, 'Oh man.' Now they just keep on lying." --Nelson Mandela annual lecture, South Africa, July 2018 "When we measure our greatness as a nation by how far the stock market rises or falls, instead of how many opportunities we've opened up for America's children, we're displaying a preference for the childish." --Northwestern University commencement, June 2006 "I am reminded every day of my life, if not by events, then by my wife, that I am not a perfect man." --Campaign rally, June 2008.