My Brother's Road: An American's Fateful Journey to Armenia (Paperback) 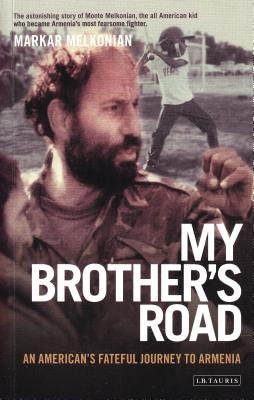 By Markar Melkonian
$33.69
We can order this for you!
(This book cannot be returned.)

What do 'Abu Sindi', 'Timothy Sean McCormack', 'Saro', and 'Commander Avo' all have in common? They were all aliases for Monte Melkonian. But who was Monte Melkonian? In his native California he was once a kid in cut-off jeans, playing baseball and eating snow cones. Europe denounced him as an international terrorist. His adopted homeland of Armenia decorated him as a national hero who led a force of 4000 men to victory in the Armenian enclave of Mountainous Karabagh in Azerbaijan. Why Armenia? Why adopt the cause of a remote corner of the Caucasus whose peoples had scattered throughout the world after the early twentieth century Ottoman genocides? Markar Melkonian spent seven years unravelling the mystery of his brother's road: a journey which began in his ancestors' town in Turkey and leading to a blood-splattered square in Tehran, the Kurdish mountains, the bomb-pocked streets of Beirut, and finally, to the windswept heights of Mountainous Karabagh. Monte's life embodied the agony and the follies bedevelling the end of the Cold War and the unravelling of the Soviet Union. Yet, who really was this man? A terrorist or a hero?
My Brother's Road is not just the story of a long journey and a short life, it is an attempt to understand what happens when one man decides that terrible actions speak louder than words.

Markar Melkonian is a teacher, writer and veteran solidarity worker. He holds several graduate degrees, including a Ph.D. in philosophy from the University of Massachusetts, Amherst. His books include 'Marxism: A Post-Cold War Primer' and 'Richard Rorty's Politics: Liberalism at the End of the American Century'. He is a founder and a director of The Monte Melkonian Fund, Inc.

"Monte Melkonian's death left us with a riddle. How could a boy from California's heartland become a terrorist in the eyes of the FBI and a saint in the soul of a faraway nation? Who better to take up that riddle than his older brother, Markar? From the fruit fields of the San Joaquin Valley to the killing fields of the Caucasus, he brings home an unforgettable memoir."--Mark Arax, author of In My Father's Name, Staff Writer for the Los Angeles Times

"An astonishing book...Melkonian's adventures read like a modern odyssey. 'My Brother's Road' gives a little meaning to a life of political extremism. It sweeps aside the polarised views of this complicated figure, presenting him neither as complete hero nor complete villain. In the end we are left simply with a man who found it impossible to live impassively in the shadow of his people's calamity, the Armenian Genocide, and who sacrificed everything to try and correct the wrongs of the past."--Philip Marsden, author of the award-winning The Crossing Place: A Journey among the Armenians

"With a brother's memory and a philosopher's keen judgement, Melkonian reanimates a truly remarkable life."--Nancy Kricorian, author of Zabelle and Dreams of Bread and Fire

"A searing and unforgettable testimony of the revolt against justice denied. This is an excellent book, well-written, and driven by a sense of commitment which never overshoots into sentimentality or chauvinism."--Christopher Walker