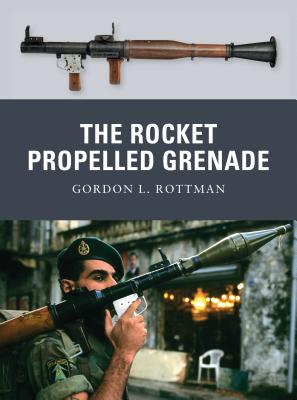 This is book number 2 in the Weapon series.

Osprey's new Weapon series provides a highly-detailed yet affordable overview of the development, use, and impact of small arms throughout history - from the sword to the machine gun.

Learn the surprising truths behind one of modern warfare's most popular and controversial firearms. Developed immediately after World War II (1939-1945), the RPG-series have proved to be simple, flexible, and powerful devices, which have had an impact far beyond original expectations. Track its development and deployment firsthand, from the Vietnam hills to the streets of modern Baghdad.

Gordon Rottman provides a detailed analysis of perhaps one of the most important weapons to be developed in the 20th century. He has been at the receiving end of the RPG-2 and RPG-7 as well as firing them himself, providing personal testament to the effectiveness with which they accomplished their missions. This in-depth coverage is well-accompanied by Ramiro Bujeiro's battlescene artwork and Tony Bryan's cutaway illustrations.

“This surveys how the rocket propelled grenade, developed just after World War II, grew to have strategic influence beyond expectation. It's one of the most important weapons of this century, and deserves this in-depth coverage.” —The Midwest Book Review (December 2010)

“It is a fascinating look at the weapon of choice of terrorism and extremism around the world. One that is presented here for the first time in English and one that I can highly recommend.” —Scott Van Aken, Modeling Madness (October 2010)

“In this book which is the only English language book published on the subject, [Gordon L. Rottman] provides his personal experiences of [the grenades'] effectiveness, both from the receiving end of the RPG-2 and RPG-7 and the firing of them.” —www.mataka.org (November 2010)