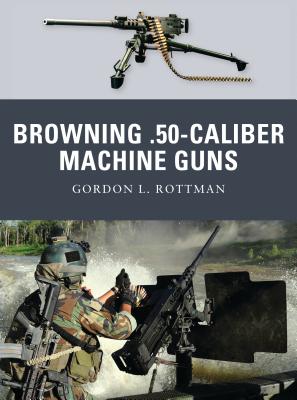 This is book number 4 in the Weapon series.

Osprey's new Weapon series provides a highly-detailed yet affordable overview of the development, use, and impact of small arms throughout history-from the sword to the machine gun.

In this volume, Gordon Rottman examines this history of the longest serving weapon in the U.S. military's small arms inventory. Thoroughly researched and illustrated with rare photographs and original artwork by Johnny Shumate, the book takes readers from the origins of the “fifty” on the battlefields of World War I (1914-1918) to its use in the war on terror today. Rottman provides lists of the companies that manufactured the Browning and analyzes the variants that have arisen over the years since it first entered service in 1933. He also provides descriptions and photos of how it was used on aircraft, ships, riverboats, tanks, Humvees, and by ground forces. A cutaway illustration from Alan Gilliland details the parts of the weapon and a final chapter dispels myths told about it.

“This book provides you with the history of its development and its various important operational uses. But more interestingly, it puts you on the front lines of war see firsthand how a fighter pilot un-jams and re-cocks a wing-mounted machine gun. You get to witness through the author's own personal experiences of how he used the 'fifty' during the Vietnam War. He brings to the life the devastating effects of an armor-piercing round fired from a Humvee.” —www.mataka.org (November 2010)