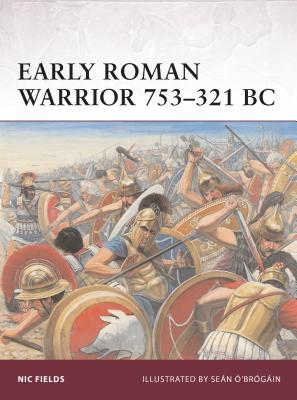 Osprey's survey of early Roman warriors from 753 to 321 BC. The prototypical 'Roman Legionnaire' often seen on television and in movies is actually the product of nearly a millennium of military development. Far back in the Bronze Age, before the city of Rome existed, a loose collection of independent hamlets eventually formed into a village. From this base, the earliest Roman warriors launched cattle raids and ambushes against their enemies. At some point during this time, the Romans began a period of expansion, conquering land and absorbing peoples. Soon, they had adopted classical Greek fighting methods with militia forming in phalanxes. This book covers the evolution of the earliest Roman warriors and their development into an army that would eventually conquer the known world.

Dr Nic Fields started his career as a biochemist before joining the Royal Marines. Having left the military, he went back to university and completed a BA and PhD in Ancient History at the University of Newcastle. He was Assistant Director at the British School in Athens, Greece, and then a lecturer in Ancient History at the University of Edinburgh. Nic is now a freelance author and researcher based in south-west France.

Seán Ó'Brógáin lives and works in Donegal, Ireland. He has a BA (Hons) in Scientific and Natural History illustration from Lancaster University, and has worked for a wide range of clients. In addition to his stunning work for Osprey Publishing, he has collaborated with the University of Manchester, An Post, the National Museum of Ireland, the Irish Office of Public Works and a variety of media companies, museums, councils and private individuals.