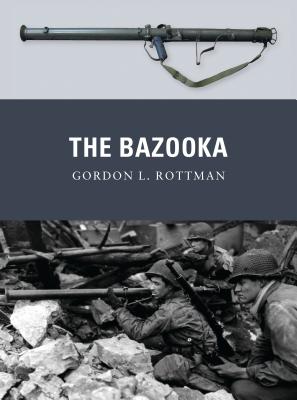 This is book number 18 in the Weapon series.

The bazooka was the popular name given to the innovative US rocket-propelled, man-portable antitank weapon that saw widespread service with US and other forces from 1942 to the early 1980s and was described by Eisenhower as one of the four "Tools of Victory" - with the atom bomb, the Jeep, and the C-47 Skytrain transport aircraft - that won World War II for the Allies.

Most belligerents entering World War II armed their infantry with bulky and ineffectual antitank rifles as their primary means of combating tanks, but US planners realized that what infantrymen needed was a relatively lightweight, man-portable antitank weapon that was simple to operate, accurate, and capable of knocking out the average tank at a reasonable range, while also being effective against fortified buildings, pillboxes, and personnel in the open. The bazooka combined a revolutionary new antitank rifle-grenade warhead, a much-modified British antiaircraft rocket motor, and a cobbled-together launcher tube and electrical firing system; its first test-firing astounded observers, and it was immediately adopted by the US armed forces.

Although the bazooka and its ammunition suffered teething problems, US and other troops quickly found the bazooka was highly effective against an enormous variety of targets. The weapon was widely used in all theaters of war; bazookas were provided as on-vehicle equipment for some armored fighting vehicles, and were even mounted under the wings of Piper Cub spotter aircraft to mark targets for fighter-bombers, and in multiple mounts on patrol torpedo boats targeting Japanese shipping. The Germans captured bazookas in North Africa and rapidly developed their own version, the formidable Panzerschreck, while the Chinese and Japanese copied the bazooka's revolutionary design.

The bazooka was not without its drawbacks, however. It was sensitive to extremes of temperature and moisture, while the large backblast and smoke trail gave away the position of the shooter, and bazooka fire teams often had to move out of cover to obtain a clear shot. Rapid improvements in German tank armor meant that in the European theater the bazooka came to be seen as a "last resort" rather than an offensive weapon. Even so, the bazooka continued to see widespread service in Korea, where the original 2.36in models were supplanted by the 3.5in "super bazooka," also issued to many NATO forces. In the early 1960s the 3.5in was replaced in US Army service by the 90mm M67 recoilless rifle and the 66mm M72 light antitank weapon (LAW), a single-shot rocket launcher similar to the bazooka. The US Marine Corps, though, retained the 3.5in as an assault weapon throughout the Vietnam era and into the early 1980s.

Featuring specially drawn color artwork, this engaging study tells the story of the bazooka, which set the standard for future light antitank weapons and their ammunition, and was a key influence on antitank tactics and techniques in the postwar era.

“The book goes into the development of the bazooka, its introduction into the military, and how it evolved. From its earliest beginnings to today's modern army, the weapon is a mainstay against armored vehicles. Accomapnying the text are numerous photographs and the usual detailed illustrations that are in every Osprey book. Another noteworthy addition to the publisher's weapon series.” —Military Heritage (July 2013)

“...provides a fine survey of the career of the bazooka and its importance in World War II ... Vintage black and white photos and color illustrations throughout make this a fine recommendation for any military equipment history holding.” —James A. Cox, California Bookwatch (October 2012)