The Complete Works of William Dampier: Containing Particular Descriptions of Life in the Torrid Zone at the Dawn of Modern Science and at the Intersec (Paperback) 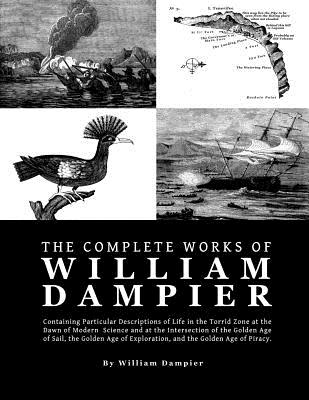 By William Dampier
Email or call for price
Special Order is possible. Currently unavailable or possibly out of stock indefinitely. Please contact us before ordering.
(This book cannot be returned.)

THE PIRATE-SCIENTIST WILLIAM DAMPIER (1651-1715) lived at a remarkable time in human history: at the dawn of modern science and at the intersection of three golden ages: the golden ages of sail, exploration, and piracy.

Dampier was a poor pirate, but precisely because he was a pirate he was able to travel the world and discover true and lasting treasure: hard and useful foundational knowledge in the realms of science, natural history, economics and political economy, hydrography, botany, zoology, ethnography, anthropology, navigation, geography, map-making, literature, and language.

INSIDE this volume you will find the complete published works of William Dampier:

Vol. 1. A New Voyage Round the World by William Dampier

Vol. 2. Supplement of the Voyage Round the World by William Dampier

Vol. 4. A Discourse of Winds by William Dampier

Vol. 5. A Voyage to New Holland by William Dampier

Vol. 6. A Continuation of a Voyage to New Holland by William Dampier

Vol. 8. William Dampier's Atlas &c. A Collection of Maps. A Glossary. A Catalog of Old and New Place Names. Dampier's Who's Who. A Brisk Biography.

Vol. 9. A Booty of Words. A Dictionary Devoted to the Linguistic Treasure Contributed to the English Language by the Pirate William Dampier

Vol. 10. Wafer's New Voyage and Description of the Isthmus of Darien by Lionel Wafer

Vol. 11. Cowley's Voyage Round the Globe by William Ambrosia Cowley

Vol. 14. Captain Sharp's Journey Over the Isthmus of Darien and Expedition Into the South Seas by Bartholomew Sharp

Vol. 15. The Voyage and Adventures of Bartholomew Sharp and Others in the South Seas by Anonymous

Vol. 17. Cruising Voyage Round the World by Woodes Rogers

Vol. 18. Life Aboard a British Privateer in the Time of Queen Anne: Being the Journal of Captain Woodes Rogers, Master Mariner by Woodes Rogers

Vol. 19. A Voyage to the South Seas and Round the World by Captain Edward Cooke