The War of the Copper Kings: Greed, Power, and Politics (Paperback) 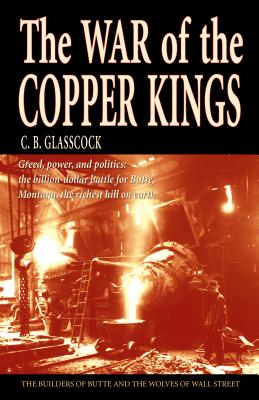 Greed and corruption, bribery and fraud, insiders getting fabulously rich while workers get robbed. Sound familiar? That was the great battle for Butte, Montana, at the dawn of the 20th century when it was the richest hill on earth. Copper was the treasure, eagerly sought for wiring the modern world, and the hard rock below Butte was riddled with thick veins of the precious metal. Those who controlled the copper could make billions of dollars, the fortune sought by three men who fought for Butte's mineral wealth with greed and generosity, cruelty and compassion, cowardice and courage. In this astonishing battle, they used their fabulous wealth to buy courts, newspapers, politicians, banks, police, and anything and anyone that could help them and hinder their opponents. To get what they wanted, their money flowed like snowmelt through the mile-high city and eventually reached the nation's capital. All the while the miners toiled thousands of feet below ground in tunnels dug with blasting powder, picks, and shovels. And sometimes, backed by rival copper kings, they also battled, with fists and dynamite, either on the streets of Butte or far below the surface. At this time, Butte was the largest city between Minneapolis and Portland, and it was a wide-open town, born only recently in the rugged Rocky Mountains. Illustrated by rare historical photos, this book tells the story of Butte and the copper kings, a story of raw human drama and timeless historical significance.