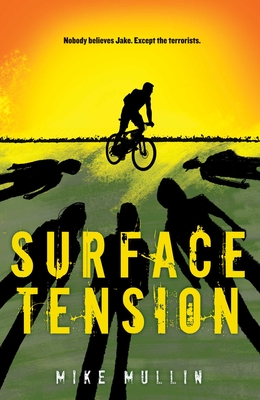 After witnessing an act of domestic terrorism while training on his bike, Jake is found near death, with a serious head injury and unable to remember the plane crash or the aftermath that landed him in the hospital. A terrorist leader’s teenage daughter, Betsy, is sent to kill Jake and eliminate him as a possible witness. When Jake’s mother blames his head injury for his tales of attempted murder, he has to rely on his girlfriend, Laurissa, to help him escape the killers and the law enforcement agents convinced that Jake himself had a role in the crash. Mike Mullin, author of the Ashfall series, delivers a gripping story with memorable characters and all-too-real scenarios.

Mike Mullin first discovered he could make money writing in sixth grade. His teacher, Mrs. Brannon, occasionally paid students for using unusual words. Mike’s first sale as a writer earned 10 cents for one word: tenacious. Since then, Mike has always been involved with literature. One of his early jobs was shelving books at Central Library in Indianapolis. Later, he paid his way through graduate school in part by serving as a reference assistant for Indiana University’s library. Mike has worked in his mother’s business, Kids Ink Children’s Bookstore, for more than twenty years, serving at various times as a store manager, buyer, school and library salesperson, and marketing consultant. Mike wrote his first novel in elementary school—Captain Poopy’s Sewer Adventures. He’s been writing more or less non-stop ever since.