There Are No Accidents: The Deadly Rise of Injury and Disaster—Who Profits and Who Pays the Price (Hardcover) 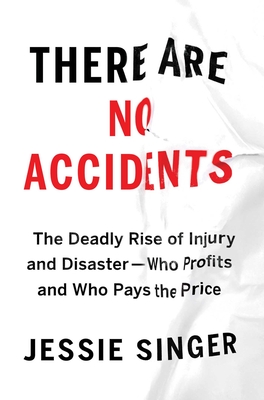 A journalist recounts the surprising history of accidents and reveals how they’ve come to define all that’s wrong with America.

We hear it all the time: “Sorry, it was just an accident.” And we’ve been deeply conditioned to just accept that explanation and move on. But as Jessie Singer argues convincingly: There are no such things as accidents. The vast majority of mishaps are not random but predictable and preventable. Singer uncovers just how the term “accident” itself protects those in power and leaves the most vulnerable in harm’s way, preventing investigations, pushing off debts, blaming the victims, diluting anger, and even sparking empathy for the perpetrators.

As the rate of accidental death skyrockets in America, the poor and people of color end up bearing the brunt of the violence and blame, while the powerful use the excuse of the “accident” to avoid consequences for their actions. Born of the death of her best friend, and the killer who insisted it was an accident, this book is a moving investigation of the sort of tragedies that are all too common, and all too commonly ignored.

In this revelatory book, Singer tracks accidental death in America from turn of the century factories and coal mines to today’s urban highways, rural hospitals, and Superfund sites. Drawing connections between traffic accidents, accidental opioid overdoses, and accidental oil spills, Singer proves that what we call accidents are hardly random. Rather, who lives and dies by an accident in America is defined by money and power. She also presents a variety of actions we can take as individuals and as a society to stem the tide of “accidents”—saving lives and holding the guilty to account.

Jessie Singer is a journalist whose writing appears in The Washington Post, The Atlantic, The Nation, Bloomberg News, BuzzFeed, New York magazine, The Guardian, and elsewhere. She studied journalism at the Arthur L. Carter School of Journalism at New York University, and under the wing of the late investigative journalist Wayne Barrett.

“[A] searing, deeply researched account…An eye-opening, urgent book that demands an end to inequality as a matter of life and death.” —Kirkus (starred review)

"Lucid and well researched, this is an eye-opening call for rethinking the nature of accidents." —Publishers Weekly

“A brilliant and alarming analysis, imbued with empathy and appropriate rage, of a tragic, far-too-common problem.” —Booklist (starred review)

“Sometimes a book comes along that changes the way you think about the world. I’m questioning my acceptance of the word 'accident' after reading Jessie Singer’s There Are No Accidents.” —Los Angeles Times

“With deep documentation, Jessie Singer demonstrates how the false culture of ‘accidents’ as ‘unforeseen and unplanned events’ is a convenient cover for corporate crimes, negligence, and sheer greed. Whether on the highways, in the workplaces, or in the marketplaces, Singer illuminates how powerful interests could be acquired in many ways to prevent or mitigate the horrific casualties which now are profitably blamed on their victims. After reading this book, you’ll recoil when you hear the word ‘accident.’” —Ralph Nader

“Provocative and illuminating. Like Ralph Nader’s Unsafe at Any Speed, There Are No Accidents trains a spotlight on the powerful interests that benefit by framing accidents as the fault of reckless individuals rather than hazardous systems. An important book that deserves a wide readership—and that will make you think twice before ever labeling something an ‘accident’ again.” —Eyal Press, author of Dirty Work and Beautiful Souls

“As a cyclist for nearly four decades, I’ve suffered my share of broken bones and scraped skin, concussion, fear and loathing—all, as Jessie Singer brilliantly shows, were not accidents. I’ve seen it in epidemics, where human actions aid the microbes. And in the floods, earthquakes, hurricanes, and wildfires I have covered. Singer’s clarion call is spot on: confront the systems and powers that choose blame over prevention.” —Laurie Garrett,  Pulitzer Prize–winning author of I Heard the Sirens Scream

“A furiously researched, lucidly written book. Singer leads us, almost without our realizing it, to consider our own willingness to explain away disastrous events instead of confronting their systemic causes. She persuasively tells her readers that the sooner we quit thinking that way, the better off we will be.” —Christopher Bonanos, city editor of New York magazine and author of Flash: The Making of Weegee the Famous

“I’ve been waiting for a book that would confront, head-on, the dauntingly complex, inevitably tragic, and often widely misunderstood nature of unintentional death and injury. With deep research, clearly expressed insight, and proper indignation, Jessie Singer has delivered admirably.” —Tom Vanderbilt, author of Traffic: Why We Drive the Way We Do (and What It Says About Us)

“As this brilliant book makes clear, death or injury from accidents is very much a function of wealth and power. And if we really learn that fact, we might take the steps necessary to reduce the toll of these traumas.” —Bill McKibben, author of The Flag, the Cross, and the Station Wagon

“In this fascinating work, Singer challenges the reader to consider whose deaths are brushed off as ‘accidents,’ which communities suffer the most from ‘accidental’ harm, and who can use ‘It was just an accident!’ as a get- out-of-jail-free card. This essential book will make you angry, and change the way you see the world.” —Kim Kelly, author of Fight Like Hell: The Untold History of American Labor